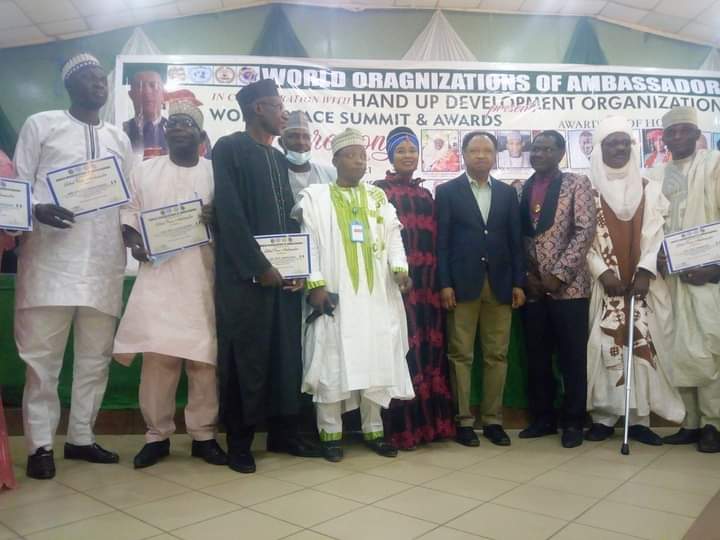 Former Senator representing Kaduna Central District, Senator Shehu Sani, has been conferred award recently as the Nigerian Human Rights Defender of the year by Ashbab Impacts and by World Organization of Ambassadors, in Collaboration with Hand Up Development Organization, has also awarded him as world Ambassador for peace.
Senator Sani who has received so many awards both local and international following his work of activism to ensure that Government at all levels focus more on developing the people particularly the less privileged and the downtrodden rather than seeking for personal gain.
He also used the occasion to call on kaduna state government to wake up from their slubber and live up to expection by providing security for the people of the state.
Speaking to Journalists shortly after the event at the Arewa House, Kaduna, the African representative, World Ambassador to Argentina, His Excellency, David noted that the Senator emerged victoriously after nomination from citizens and careful examinations carried out about his personality, expressed that the world lacks peace and therefore there is need to encourage peace lovers so they can serve as peace engineers in their localities.
“The award is meant to select peace engineers in various localities that will do what they ought to do in their various communities. We understand that our world is lacking peace and so we are out to encourage peace makers so they can be proactive in their respective places of localities. He said.
Ambassador Shehu Sani a Nigerian activist, was born in 29th October, 1967, who became a Nigerian Senator in 2015, after defeating Senator Sani Saleh in the primaries and defeated Senator Muktar Aruwa in the General Election, and became the first and only Nigerian Senator to declare his assets publicly on the 4th of September, 2015.
While he was in the Senate chamber, he was the Senate committee Chairman on local and and foreign debts. He also served as the vice Chairman, on Senate committee on foreign affairs.
His work of activism was visible to all as the proactive young man in the 8th National Assembly.