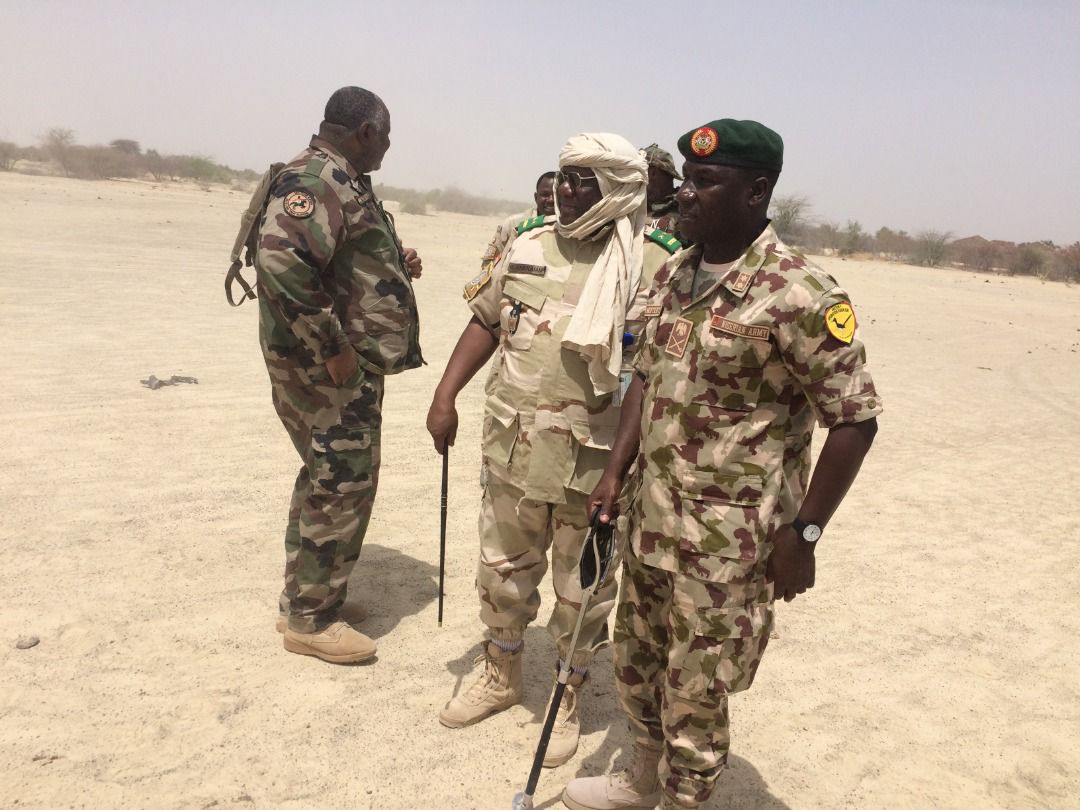 In a clear demonstration of it’s determined efforts to speedily eliminate the Boko Haram Terrorists /Islamic State of West Africa Province (ISWAP) insurgents hibernating along the fringes of the Lake Chad, the forces of the Multinational Joint task Force (MNJTF) have in the past weeks been conducting a well coordinated land and air offensives.

The Operation codenamed OPERATION LAKE SANITY is a joint and combined operations involving the MNJTF troops from Nigeria, Niger and Cameroon and troops from Operation Hadin Kai (OPHK- Nigeria) as well as the Air Task Forces of the MNJTF and OPHK, other security agencies and the Civilian Joint Taskforce (CJTF).

Steadily advancing in different corridors of the theatre towards identified enclaves, the dogged troops operating under the shared aspiration of the MNJTF made gradual but unprecedented incursions into the insurgents dens.
Some of the areas cleared include ZANARI, ARINA WOJE which served as a major fabrication workshop, ASAGAR, LARKI and GARERE. Other areas cleared include KERENOA, WURJE, AREGE, ABADAM, DORON LELEWA, KOLARAM and several other locations around the Islands. Within the period of this operation, well over a hundred terrorists have been neutralised.

Including over 10 top commanders neutralised following intelligence driven lethal air strikes in the Lake Chad islands by the combined Air Taskforces. Some of the commanders include Abubakar Dan Buduma, Abubakar Shuwa, Abu Ali and Abu Jubrilla among others.
Relatedly, sophisticated weapons of different calibres were either destroyed or captured including a 105 mm artillery piece, several canoes/boats, motorcycles, bicycles, other terrorists’ equipment, several Improvised Explosive Devices (IED) making factories and bunkers were destroyed. In the course of the operation, significant number of innocent citizens mostly women and children held captive by the criminals were rescued. Large quantity of food stuff (grains), fuel dumps, illicit drugs, terrorists’ uniforms and other house holds materials were recovered and destroyed immediately.

Recent activities of the Operations include a clearance patrol to Fedondiya settlement where logistics and foodstuffs including several bags of maize and beans, motorcycles, some immobilized and cannibalized military and civil vehicles, were discovered. Others include grinding machines ,other vehicle fabrication tools and military uniforms were all destroyed and set ablaze in the location.
It is obviously a big Boko Haram /ISWAP camp having another large IED making and vehicle borne IED making factory that was cleverly camouflaged to prevent detection from the air. In a related development, the MNJTF troops on clearance patrols in the general areas of Kimeguna near the Lake Chad in Niger republic accosted BHT/ISWAP logisticians ferrying Four Hundred Fifty Seven (457) bags of fish in several carts. The bags of fish were immediately destroyed in line with the MNJTF Standing Operating Procedure, while the suspects are being profiled.

The obviously frustrated criminal,BHT/ISWAP have resorted to indiscriminate laying of IEDs and use of Vehicle Borne Explosive Devices attacks. One pattern noticed in the operation is that the criminals hastily withdraw and avoid making contact with the approaching troops .
They instead rely on suicide vehicle borne attacks. About four (4) different such attacks have so far targeted the determined troops who have not been deterred. Sadly, eighteen (18) soldiers including an officer have been wounded in these attacks and have been evacuated to various military medical facilities for treatment while three soldiers and one member of the CJTF paid the supreme sacrifice.

Despite the obvious challenges of difficult terrain,IED threats and sundry challenges, especially in this religious season, the troops continue to maintain the momentum, remaining focused and determined to pursue and decimate the fleeing terrorists, wherever they go in the Lake Chad islands. The Force Commander (FC) MNJTF, Major General Abdul Khalifah Ibrahim has commended the Deputy Force Commander, sector commanders, other officers and especially the gallant officers and men of MNJTF and other operations, including the CJTF actively operating in the field for their courage and commitment. While paying tribute to the members of this operation, who paid the supreme sacrifice in the line of duty, he referred to them as heroes that would never be forgotten.
He also prayed for the quick recovery of the wounded heroes. The FC urged the troops to be resolute and bold to finally eradicate the criminals from the Lake Chad areas and promised continuous logistics support to the troops. General Ibrahim advised the terrorists to lay down their arms like thousands of their colleagues who had done so instead of pursuing a futile and failed cause. He finally appealed to the communities in the areas of operation and beyond to always support security forces by passing credible information on the terrorists quickly to bring the scourge of terrorism in the area to an end. ( See Attached pictures of the Operation)