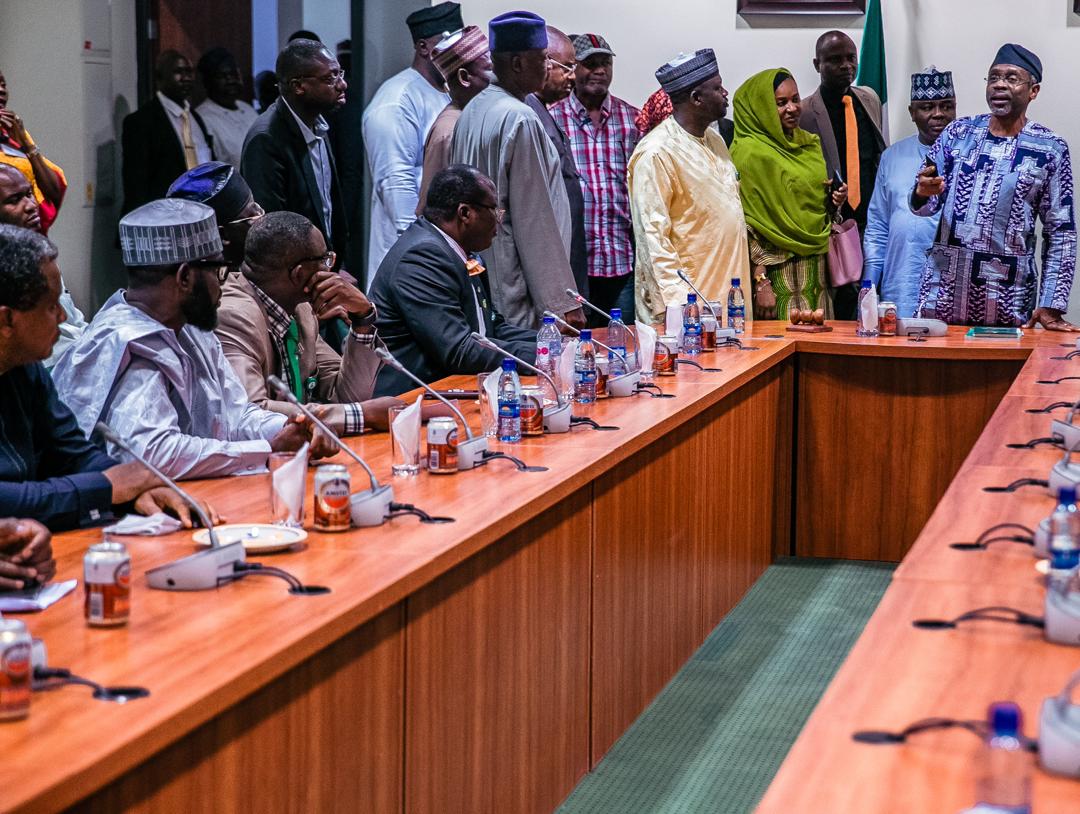 The Speaker of the House of Representatives, Rt. Hon. Femi Gbajabiamila has brokered a truce between the Federal Government and the National Association of Resident Doctors (NARD), which saw the association extending the suspension of its planned strike action.
The Speaker had last week through a member of the House appealed to the resident doctors to suspend the strike action, pending a meeting involving him, members of the association and officials of relevant government agencies.
At the meeting held on Monday, July 29, 2019, at the National Assembly, Abuja, the Speaker was able to convince both the association and officials of the Federal Ministry of Health to reach an agreement on how to settle the matter.
The President of NARD, Dr. Olusegun Olaopa, had explained to the Speaker and other principal officers of the House, including Deputy Speaker Rt. Hon. Ahmed Idris Wase, that they had three major grievances against the Federal Government.
The three grievances, he said, had to do with their salary arrears, skipped salary of N23.6bn and irregularities in the implementation of the Resident Doctors’ Act.
However, Speaker Gbajabiamila was able to get a commitment from both the Federal Ministries of Finance and Health that the salary arrears would be ready for payment in the next three weeks.
While commiserating with the association for losing one of its members in the process of struggling to resolve the issues, Speaker Gbajabiamila said: “Let me thank you for according this House and this institution the respect of putting your strike on hold.
“I want to assure you that the respect is mutual. We are here for you; we are here to protect you, and in doing that, we also protect our constituents. When you talk about essential services, the most important is health services, because you save lives. So, we know the consequences of your going on strike. Since we all know the consequences, we should be serious about the issue.
“Ours is to appeal to you using the instrumentality of this House. The issue of your N3.5bn. I can almost assure you that that will be resolved next month. There’s already machinery in motion to ensure that it is paid by next month.
“In the presence of everyone here, finance (ministry) is committing three weeks and you’ll get your pay. As a house, we’ll make sure we follow through. So, for the sake of lives, on that particular one, I beg you to tarry a while,” he said.
On the Resident Doctors’ Act, the Speaker said the House would do everything within its powers to ensure that the House Committee on Health provided effective oversight to the relevant agencies.
The Speaker also assured that the House would ensure the inclusion of the N23.6bn skipped salary due to the doctors in the 2020 budget, which is yet to be presented to the National Assembly.
“We’re going to put our reputation on the line and try to see how we can get the Executive to bring whatever is agreeable and due to them (NARD) into the budget. On our part, we will make sure that whatever is due to you forms part of the 2020 budget.
“But I’m asking now that you should exercise some little patience to see what we can do on our own so that we can arrest this issue. For the sake of people out there, let’s hold on.‎ Once the N3.5bn is paid, you can take it from there that the 2020 budget will have the N23.6bn.”
Responding, the NARD President, Dr Olaopa said the association would wait for the three weeks, saying “We assure you that we will keep our part of the agreement.”
The meeting, which lasted for close to two hours, had in attendance the Deputy Speaker Rt. Hon. Ahmed Idris Wase; House Leader, Alhassan Ado Doguwa; Deputy Chief Whip, Nkeiruka Onyejeocha and other members of the House.
There were also officials from the Federal Ministries of Finance and Health, the Director-General, Budget Office, Ben Akabueze, members of NARD and the Nigerian Medical Association (NMA), among others.