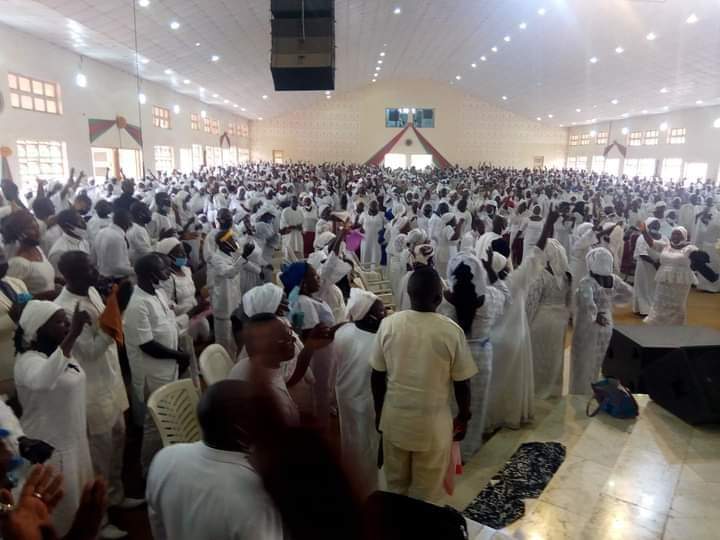 The President of the Christian Association of Nigerian (CAN) who also doubled as the National President of the Baptist Convention Rev.(Dr) Supo Ayokunle on Sunday joined other Christian faithfuls in prayers and protest tagged ‘White Sunday’ against the unwarranted killings and wanton destruction of properties in Southern Kaduna.

Also among the dignitaries that joined in the prayers and protest is the President of Evangelical Church Winning All (ECWA) Rev. (Dr) Stephen Payan Baba and former CAN National Secretary Engr. Samuel Salifu and the HEKAN President Rev. Amos G. Kiri.

In his address to the Christians, the CAN President said lawlessness must not be allowed to prevail, stressing that when expectations from leaders are not met, only fools will keep quite.

He called on Christians not to keep quite in face of injustice, adding that development cannot happen in the face of violence and unrest, while praying God to wipe away the killers.

“We are tired of blood letting and you cannot fold your hands and allow people who don’t value human lives come and kill you and destroy your properties, you must rise up to the challenge in defence of yourself against the killers.

” People of Southern Kaduna like any other Nigerian citizens has right to live and that is what I will discuss with the Governor when I meet him and for him to do all within his powers to stop the killings in Kaduna State”.

On his part, the President ECWA worldwide, Rev. Payan-Baba said there is conspiracy of evil against the Christians and urged for persistent prayers against the plans of evil ones, while calling on government to rise up to the responsibility of protecting her citizens and providing for their needs.

Earlier in his message titled Sorrow, tears and blood, God come to our aid, Rev. Father Fredrick Byat decried the reoccurring killings by human beings whom he said has lost their feelings for humans.

” Fulani militia are in a genocidal mission and killing with reckless abandon with colossal failure on the part of government to stem the tide.

“Government leaders who fail to act in accordance to the constitution they swore to should resign, effort being put in place to contain the covid 19 pandemic should also be replicated in protecting people against killers.

” Government will be seen as conspirators if they fail to protect citizens against attackers and evil will triumph if good people fail to do something, killing everywhere must be condemned.

” No need to keep silence or seat on the fence, we must speak out, killing in Southern Kaduna is satanic and callous, peace is an illusion in the absence of justice”.

He urged Christians not to take their safety forgranted but to pray for their safety and remain watchful. “President Muhammadu Buhari and Governor Nasir el-Rufai must be guided by wisdom of God and love for humanity” he stressed.

Also speaking, the CAN Chairman, Kaduna State Chapter, Rev. John Joseph Hayab told the congregation that the prayers and indoor protest comes to a climax next Sunday the 23rd August, 2020 which he said will also be a White Sunday program.

He maintained that Christians should continue to pray for Nigeria and Kaduna State that God will bring all the attackers on their kneels and expose them and that God will continue to fight the battle of his people.

The congregation who were all adorned in white attires also carried out an indoor protest carrying placards with various inscriptions against the blood letting in Southern Kaduna of Kaduna State.