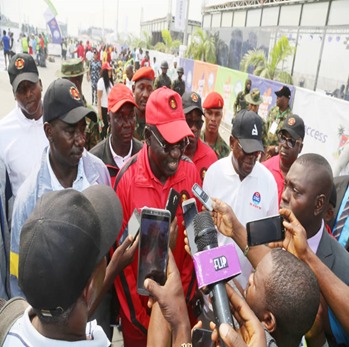 The Chief of Army Staff, Lieutenant General Tukur Yusufu Buratai has described the clinching of nine individual cash prizes in the 42 kilometer, 10 kilometer male and female categories of the Lagos City Marathon as a source of pride.

According to a statement signed by the Nigerian Army Operations Media Coordinator, Colonel Aminu Iliyasu, made available on February 10, 2020, he expressed this in his address to the victorious team, congratulating the athletes for their brilliant performance which as he noted, has brought pride and honour to the Nigerian Army.

The young Nigerian Army athletes competed among Africa’s and the world’s best in both the 42-kilometer Marathon and 10-kilometer races with high spirit and enthusiasm.

The Chief of Army Staff flagged off the historic event at the National Stadium, Surulere Lagos with over 50,000 athletes drawn from across the world to compete in the 2 categories vying for glory.

“It is heart-warming to note that, in the Male category of the 42 kilometer Marathon, Private Solomon Dauda and Lance Corporal Raymond Nanribel won the 7th and 10th positions respectively,” he said.

This was indeed the case as the Nigerian Army athletes were known to have led the medal tables in events and championships such as Field and Track events, Judo, Kickboxing, Taekwondo, Marathon, basketball, volleyball, etcetera.

In various commendable feats that indeed herald the full return of those good old days of Nigerian Army’s sporting glory, within the past one week, Nigerian Army athletes took part in at least three different local and international sporting tournaments and won excellent laurels in all of them.

It is gratifying to report that a Nigerian Army female athlete, Lance Corporal Hannah Reuben was among the athletes that represented Nigeria at the just concluded African Wrestling Championships in Algiers, Algeria between February 4 to 8, 2020.

Lance Corporal Hannah Reuben, who was sponsored to the Championships by both the Federal Ministry of Youths and Sport and the Nigerian Wrestling Federation, was visibly dominant in the 65kg category where she overpowered home girl Amel Hammiche 12-1 via superiority in the final match to reclaim her African title. She and other medalists in the team are billed to represent Nigeria in the 2020 Tokyo Olympics with high optimism for a medal.

It would be recalled that in the 70s and 80s, Nigerian Army athletes were shining lights in virtually all local, African and international sporting events around the world.