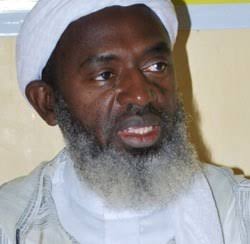 The last general elections conducted by the Independent National Electoral Commission (INEC) has been describedas the most fraudulent elections conducted in the history of the Country by Kaduna Based Islamic Scholar, Dr.Ahmed Mahmud Gumi.
According to him,  the surest way to move the country forward is to have an election that is free, fair and credible.

Gumi made it known during a courtesy visit to his resident by the leadership of Evangelical Bible Outreach Ministries International (EBOMI), in Kaduna on Thursday, where he said Nigerian leaders lack requisite knowledge to move the country forward.
Gumi who was optimistic of a better Nigeria in the future says:  “Nigerian present leaders are not educated enough to solve Nigeria’s problems”.
He went further to said that, with present situation in the country, Nigerians are already feeling the pains of leadership incompetence.
He also called on the southern politicians who according to him had betrayed Nigerians by supporting incompetence to desist from deceitful politics for the betterment of the country.
“Non of those southern political leaders who betrayed the Nigerian Masses will get our support in the coming elections”, the Sheikh emphasized.
He further explained that the wrong selection of leaders has subjected the masses to abject poverty especially in the northern part of Nigeria.
“As a people, we must desist from deceitful politics, because, I so much believe that religion should not be a yardstick to build Nigeria”, he said.
Also receiving EBOMI to his office, the Chairman of Christians Association of Nigeria (CAN), Kaduna State Chapter, Rev. Joseph Jonh Hayab said every opportunity of his life has always been channeled towards promoting peaceful coexistence amongst the diverse groups in the state.
According to him, ” in my family, we have Christians and Muslims, so, I can never be a religious bigot.
” In this city, I have seen good, bad and ugly, especially during the Miss World Crisis. In the last nine years, I have been advocating for Peaceful coexistence and oneness of our people.
” Those who claimed to love Kaduna more than some of us, where were they during this years that crisis nearly consumed the people”, he asked.
Hayab who commended the delegation of EBOMI, promised not to relent in promoting peace and always stand by the truth.
In his remarks, the President of EBOMI, Prophet Isa El-Buba said the situation in the north is pathetic and mind blowing, hence the need for urgent attention to tackle the scourge.
El-Buba who seeked the support of the religious leaders said there is the need to come together and wrest power from those he considered as selfish politicians and leaders.