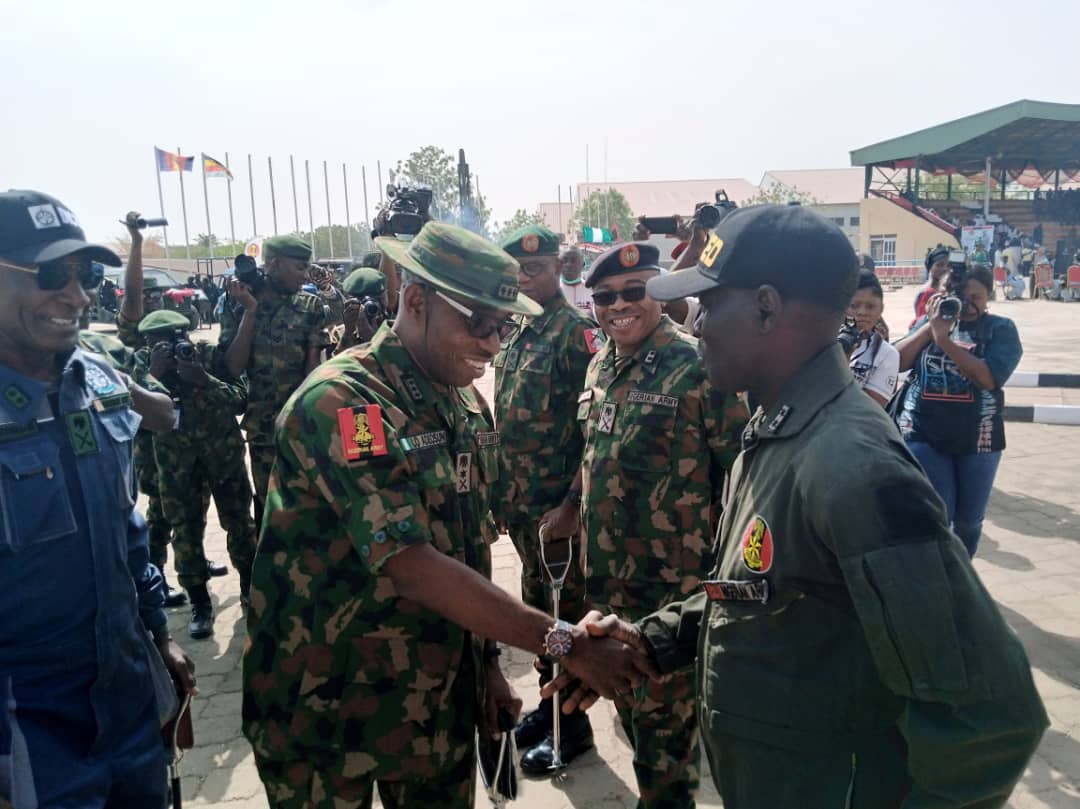 Apart from its traditional role of protecting Nigerian Army To End Terrorism, Developing Capacity To Boost Nigeria’s Economy – BurataiNigeria’s territorial integrity, the Nigerian Army is highly determined to end terrorism and is developing capacity to contribute to the country’s economic agenda.
Chief of Army Staff, Lieutenant General Tukur Yusuf Buratai expressed this, while speaking at the Nigerian Army (NA) Special Day at the 41st Kaduna International Trade Fair.
The NA apart from its primary role of defending the territorial integrity of Nigeria is also involved in fighting insurgency in the North East part of the country and other internal security operations across the Nation.
“However, In line with global trends, the NA is equally developing  capacity to contribute to the economic development agenda of the government through the establishment of some army units such as Nigeria Army Farm and Ranches, NA Post Service Housing Development Limited, Command Engineering Depot as well as NA Property Limited and NA Welfare Limited by Guarantee,” he said.
He commended the efforts of Defence Industries Corporation of Nigeria (DICON) in  collaboration with Command Engineering Depot (CED) under the leadership of Major General Victor O. Ezugwu for the historic research, development and production of Ezugwu – the first indigenous Mine Resistant Ambush Protected Vehicle using 70 per cent local content. “Additionally, the strategic alliance between DICON and CED has led to the production of patrol vehicles, bullet proof vests, bailistic helmets and most importantly mine and IED clearance equipment.
“These vehicles and equipment which are on display at this venue have been inducted into the military counter insurgency operations in the North East.
Other NA outfits that have added value to the economic development of  Nigeria include NA Post Service Housing Scheme. NA Property Ltd and Nigerian Army Farms and Ranches.  “These outfits not only serve the interest of NA personnel but also avail its products and services to the general public at relatively affordable prices hence our participation at Kano, Abuja and now Kaduna International Trade Fairs,” he said.
Buratai explained that the  overall objective is to make the Nigerian Army a peoples’ Army with versatility in fighting the enemies of Nigeria and food insecurity on the other hand.
Speaking further, he said that the Medical Corps has also impacted positively to the Health Sector across Nigeria by providing medical services and assistance not only to our troops but also the civil populace. “Permit me to use this medium to assure you all of the commitment of the NA in collaboration with our sister security Services to always emerge victorious against the enemies of our national peace and security.
“Specifically, few days ago, our troops deployed in Damboa Bornu State recorded a resounding tactical victory against the evil forces of Boko Haram who dare the superiority of our Forces.
“They paid very dearly for it by the monumental losses in men and equipment.
‘Let me once more remind us that the ongoing operations in the NE is asymmetrical and not a conventional warfare. We hereby solicit the support, prayers, patience and understanding of all Nigerians’ .
“There is no doubt that the much expected victory which comes from God alone shall be ours,” he assured.
He  used the opportunity to express  appreciation to President. C-in-C of the Armed Forces of Nigeria, President Muhammadu Buhari, for his continuous support, direction and encouragement to the NA.
” I will like to conclude this remarks by assuring the Government of the Federal Republic of Nigeria led by President Muhammad Buhari of the determination, zeal and resilience of officers and men of the NA to secure the entire length and breadth of  Nigeria.
” Finally let me commend the officials of KADCCIMA, the DG DICON and other NA companies and establishment that graced this trade fair for their impressive outing this NA Special Day at the 41st Kaduna International Trade Fair. “It is my singular honour and privilege to be here on the maiden 41st KADUNA INTERNATIONAL TRADE Fair and  would like to commend the efforts of the Chairman and other council members of Kaduna State Chamber of Commerce Industries Mines and Agriculture (KADCCIMA) for the huge standard attained in this year’s edition.
“It is very obvious that this platform provides one of the best opportunities to interact and enlighten the civil populace about the constitutional roles of the NA in contemporary timee,” he added.