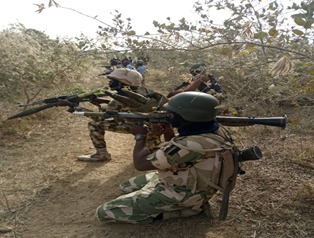 Former Commissioner of Police, Lagos State, Alhaji Abubakar Tsav, has commended the Chief of Army Staff, Lieutenant General Tukur Buratai and his gallant troops for a display of sheer “gallantry and patriotism” against Boko/ISWAP terrorists. According to Mr Tsav, the COAS has once again silenced his critics and proven beyond reasonable doubt that he is worthy of President Muhammadu Buhari’s trust and that of Nigerians despite the conspiracy.

Scores of insurgents lost their lives on Wednesday after the gallant troops repelled an attack in Damboa, a town 85 kilometres away from Maiduguri, the Borno State capital. The Nigerian soldiers were unscathed from a five-hour gun duel which left dead bodies of the insurgents and their 19 abandoned trucks littered on the ground.

I was specifically elated with the strides of our combined troops, comprising the Nigerian Army and the Nigerian Air Force under the “Operation Lafiya Dole which recorded yesterday’s blistering victory (March 4, 2020) over Boko Haram criminals and ISWAP terrorists in Damboa, Borno state. A battalion of insurgents laid ambush on our troops and the natives, with the intention of overrunning the town.

But in a surprise bulwark of defence network mounted by our brave troops, the invading insurgents were pounded so mercilessly to the extent the survivors had to scamper for safety. The terrorists least expected this fatal fate. News reports had it that several insurgents met their waterloo during the encounter and 19 of their warfare vehicles were also destroyed. It happened both during the fierce exchange of gun battles and their defeatist retreat after a hot chase by our ground and air forces,” he said

Being a security expert himself, Alhaji Tsav likened the Nigerian troops to its American counterparts with zero tolerance for terrorists. He expressed pride in their consistent show of bravery and courage amidst distraction by paid critics behind beguile negative scripts. Mr. Tsav added that this may not have been achieved without Lt. Gen Buratai’s focused leadership and tenacity, who he says has done enough to earn his respect and that of all Nigerians. This victory, according to the ex-CP, however, is an indication that all the military need is encouragement and not disparagement from Nigerians.