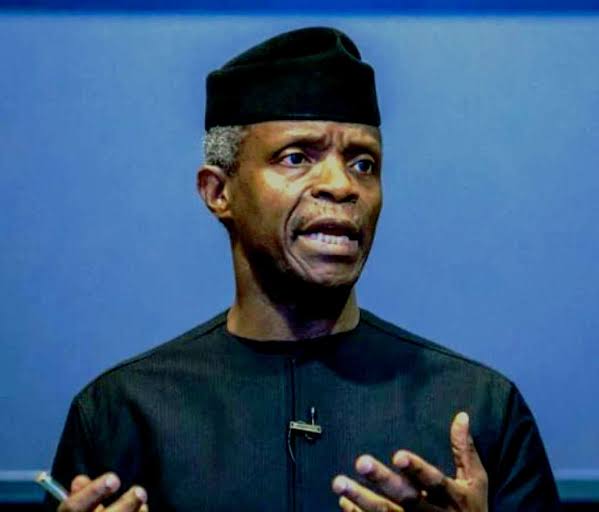 The Arewa Youth Group has described the intrigues, shenanigans and conspiracies and falsehood against the vice President, Professor Yemi Osinbajo has handiwork of political desperadoes who should not be taken serious.
According to a statement issued and made available to newsmen in Kaduna, the group said, “We, as members of Arewa Youth Assembly have been watching very closely the vituperations falsehood and vendetta directed at the person and office of the vice president.
“We have read series of paid advertorials where professional mudslingers at the urging of their sponsors took shots at the hardworking and God-fearing professor of law of evidence and law of proof”.

The statement which was signed by  the Speaker of the Assembly, Mohammed Salihu Danlami said, “We wish to use this medium to tell those political buccaneers who are sponsoring these hate-filled and lay laden advertorials to put an end to the despicable and damnable type of life style.
“Although as a forum, we knew most of them are serial liars who are suffering from a rare character disorder known as dishonest integrity.
“Even when the Vice President’s achievements are indisputable, and have been reputed for unquestioned integrity, a man of truth, probity and honesty. He is a stabilizing force in Nigeria polity, a visionary performer who broker peace with Niger delta militant.
“The audacity of lies against Vice President cannot stand, the so called coup plotters and ethno-religious sentiment must be resisted, we must begin to build a Nigeria where tribe and religion are simply not a factor.
“The Vice President is a man with depth and substance. Today as far as we are concern the Vice President is a day in the legal profession with impeccable academic credentials and enviable devotion to duty that inspired his student and left on their minds indelible impressions as an archetypal teacher.
“His cerebral contribution to academic excellence is unrivalled in the history of legal scholarship in Nigeria. Prof Yemi’s erudition, dedication and hard work earned him many accolade in legal education in Nigeria, including being conferred within the rank of Senior Advocate of Nigeria (SAN).
“While our president was on sick bed the acting President was busy strengthening the foundation of peace and stability across the country. We drank from your fountain of sempiternal knowledge and benefited from your unstinting ethical, academic and political mentorship.
“Your towering intellectual profile did not diminish your humility and accessibility to all those who summoned courage to break through the facade of a hard man.Prof. Yemi is no stranger to politics, administration and academic and almost every sphere of dealings in this country. His antecedents and contributions to the smooth socio-economic, political and economic running of Nigeria have stood the test of time and pressure, never wavering or bulking.
“The jaundiced political hysteria of all those behind these self destruction have succeeded in exposing their ignorance to the dynamic of modern leadership anchored on the plank of peace and having a clear-cut demarcation of leadership and governance.
“All these hired, obscure keyboard mercenaries and their masked sponsors whom’s outburst cannot pass WAEC exam, their proclivity for abusive nay uncivil use of language least expected of a man of their standing are known for the culture of hypocrisy in all their political history.
“Despite their perceived or chest rated campaign to smear the image of the Vice President. To us, he is a bridge builder, our indefatigable leader, his unprecedented achievement, honest, proactive leadership qualities, amiable disposition and goodwill will remain immortalised in the annals of Vice Presidentship in Nigeria.Prof Yemi is a leader that have a global inter-disciplinary perspective, he has strong communication skills and while he was acting president he was able to prioritise social justice and well-being over financial growth.
“We urge Nigerians to disregard the unprovoked and perfidious attack on the person of the Vice President, we urge the public to summarily disregard these unsavoury and fabricated reports in their entirety, up till now nobody has yet produced any evidence to prove that there was any crime Prof. Yemi committed.
“All these statement that hit the print media was a calculated statement to embarrass President Mohammed Buhari. After fact checking their assertions for in accuracies, falsehoods, outright lies, misrepresentations, misinformation, disinformation and libellous comments have failed all the decent norms standards as well as the ethical principles underpinning national and international presidential communication”.