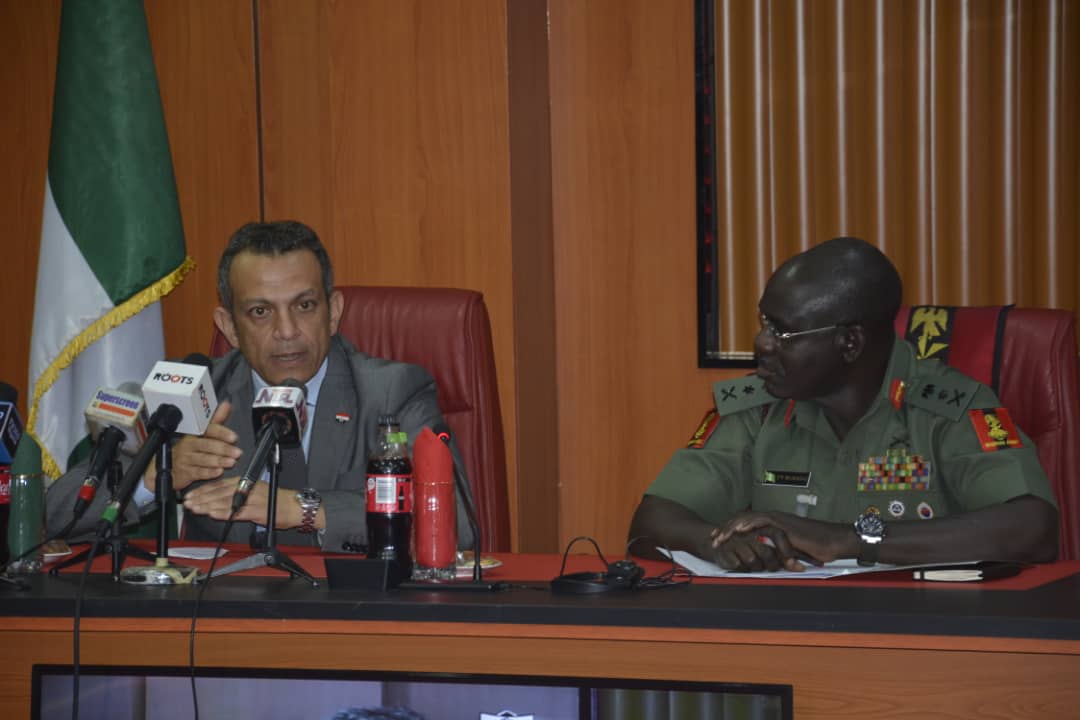 The Chief of Army Staff, Lt. Gen. Tukur Yusuf Buratai on Thursday, January 16, 2020, said there is need for more synergy between Nigerian and Egypt in the fight to checkmate and eliminate the emerging threat of terrorism spread from the African Continent.
Speaking at Army headquarters, when he received the Ambassador of Arab Republic of Egypt to Nigeria, Mr. Assem Elseify who paid a courtesy visit, the COAS noted that though the Nigerian Army was currently tackling and flushing out the menace of terrorism in the North East of the country and the Lake Chad region, it is imperative that issues of other parts of Africa with links to West Africa are of importance to it.
Buratai disclosed that Nigeria, being a member of the CEN-SAD, the community of Sahel and Saharan states which is working to have an African Standby Force, needed to work with Egypt because Egypt has the strongest military in Africa and is playing a strategic role in leading the counter terrorism efforts within the Sahel region.
Regarding Nigeria – Egypt military relations, the COAS said, “Nigeria and Egypt has consistently had wonderful relations. We both have diplomatic missions in our countries. For the military we have exchange of Defence Attaches.
“We have enjoyed reciprocated military training between Nigeria and Egyptian military. We have trained in Egyptian Defence College. We are currently receiving some air tactical training for our aviation personnel as well as specialized training in renowned Egyptian military medical institutions.
“This is because Egypt has the most powerful military in Africa and we have a lot to learn from them especially in the area of counter insurgency” Lt. Gen. Buratai said.
The COAS recalled that the year 2020 meeting of Military Chiefs of the CEN-SAD which will deliberate on the growing threat of terrorism in Africa and modern measures to tackle it, will be held in Cairo, Egypt adding that Nigeria will send a delegation.
Earlier, Ambassador Assem Elseify told the Chief of Army Staff, that he was at Army headquarters to further promote the military relations between Egypt and Nigeria which is going on smoothly.
It would be recalled that the Community of Sahel-Saharan States has 27 member-states and it is the second-largest organization in the continent after the African Union (AU).
The member States of CEN-SAD are: Benin, Burkina Faso, Cape Verde, Central African Republic, Chad, the Comoros, Côte d’Ivoire, Djibouti, Egypt, Eritrea, the Gambia, Ghana, Guinea-Bissau, Libya, Mali, Mauritania, Morocco, Niger, Nigeria, Sao Tome and Principe, Senegal, Sierra Leone, Somalia, the Sudan, Togo and Tunisia.
CEN-SAD became a regional economic community during the 36th ordinary session of the conference of heads of state and government of the Organization of African Unity, held in Lomé (Republic of Togo) 4-12 July 2000.
It holds observer status in the UN General Assembly under Resolution A/RES/56/92.
Present at the occasion, were Principal Staff Officers and Directors of Army headquarters including Major General Enebong Udoh, Chief of Training and Operations، Major General JI Unuigbe, Chief of Logistics, Major General MSA Aliyu Chief of Project monitoring, Major General Adebayo, Chief of Military Intelligence.
Others are Major General Fidelis Azinta, Chief of Standards and Evaluation, Major General Udounwa, Deputy Chief of Policy and Plans, Maj Gen Fejokwu, representing Chief of Administration, Major Gen. BO Sawyer, Director of Plans and Col Sagir Musa, Acting Director, Army Public Relations.